"Are you much of a football fan, Mommy?" 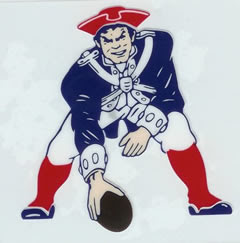 I grew up surrounded by football. When we lived in the bay area in California, my parents would tailgate the Stanford games in Palo Alto and every so often pay to see the San Francisco 49ers. Then, in later years we'd drive the 2.5 hours to see KU play. Yeah. Football and the sounds of football on tv conjures up all sorts of good family memories.

But I don't care so much for the crazy hyped-up and over-financed professional football that we have today. It's just too much in-yer-face-Americana.....

.....but then, when I have a 6 yr. old and 9 yr. old that have taken an interest in it and have lots of curiosity about the SuperBowl, I'm willing to reconsider this anti-football judgement I've made. Lots of questions about the Patriots (and the Revolutionary War) and how the team got the name and the signs of "Go Pats!" they see everywhere and who are the Giants and are they really giant and nicknames in general and will there be any muskets and (okay, no one asked about muskets but the questions that came spewing forth in regards to the Super Bowl were definitely an indication of the lack of exposure my kids have gotten....).

And in effort to join the fun and get some old-time Patriot spirit in the room, Colby makes some signs and puts them all around our family room.