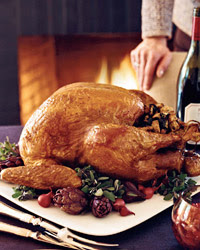 Turkey: The omnipresent, pervasive, ubiquitous fowl of Thanksgiving. For the past 16 years, Scott and I have attempted to master the perfect Thanksgiving dinner. We've brined, we've flipped, we've tried breast down, breast up, we've even smoked birds. And each and every one was dry but tasty. Chalky dry, too, like please pass that gravy boat, again. Or, maybe if I drink more wine the terribly-lacking-moisture main course will taste even better.

Until last year. When my brother (with whom I have an unspoken cooking competition) turned me on to the no-fail best roasted turkey method known to man.

OUR definitive turkey test was conducted with the help of Cedric Maupillier, executive sous-chef at Citronelle in Washington.

Each time I took the temperature of a turkey, Mr. Maupillier — without looking at the thermometer — would feel the breast and tell me whether he thought it was ready.

The heritage and wild turkeys, he said, cannot stand as high a temperature as the broad-breasted whites because they have much less fat. When the internal temperatures reached 150 degrees, he agreed that the birds were done.

Overcooking is irreversible: better to undercook the turkey and put it back in the oven if the juices run pink when it is cut.

Here is a no-frills guide to a moist Thanksgiving turkey (with stuffing cooked separately):

1. Remove giblets from turkey cavity; wash turkey, and season inside and out with salt and pepper. Place turkey in roasting pan breast side up, and brush all over with a mixture of oil and butter. You needn’t truss the bird; just tuck the wings under the body.

2. Let turkey come to room temperature, which will take at least 30 minutes. Place shelf in lower third of oven, and preheat to 475 degrees. Roast turkey for 20 minutes; reduce heat to 350, and continue to cook, at 15 to 20 minutes a pound. (Fifteen minutes is the rate for leaner turkeys.) Every 15 or 20 minutes baste with pan juices. If any part of the skin begins to brown too much, cover with aluminum foil.

3. One hour before you estimate that the turkey should be done, insert a digital instant thermometer straight down to where the leg meets the breast. Don’t let it touch the bone. If it reads 130 or above, check again in 20 minutes. Once it reaches 140, check every 10 minutes.

4. Remove turkey from oven at 150 degrees, and cover with foil. It should rest 30 minutes before carving; by then, it will reach 160 degrees. Cut into a thigh. If the juices are still pink, cut off both thighs, and return them to the oven for as much as 35 minutes, checking every 10 minutes. When juices are clear the thighs are done. If joints show some redness, that is not a concern.

If you are serving turkey to elderly people, young children, women who are pregnant or anyone with a compromised immune system, cook their servings separately to 165 degrees.

Mr. Maupillier’s method for carving the turkeys may have helped them retain their moistness. He removed all the meat from the breast and thighs, and rather than carving them into very thin slices he cut them half an inch thick and served them with a little golden brown skin attached, as duck is served in a restaurant. Very appealing.

Whatever you do on Nov. 23, forswear revelry for the last hour of roasting and stand guard over the turkey. It can go from just right to overcooked in five minutes.

Email ThisBlogThis!Share to TwitterShare to FacebookShare to Pinterest
Posted by Karen @ BonjourBruxelles at 10:15 AM
Labels: entertaining, food

you're brother sounds like a genius! is he still incredibly handsome and somewhat Christ-like?

unfortunately, no. poor soul. he went to Scandinavia and returned rather ruddy-faced and smelling of creamed herring.

why are you so jealous of his unfettered successes in life?

unfettered? I think you mean wobbly successes in life.

i just ordered my pre roasted turkey. i'm so lame.