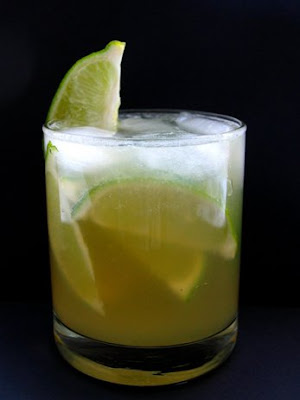 Build in an ice filled highball glass (or copper mug). Garnish with a lime wedge.


No, we're not talking about Putin. This mule is the one that apparently kicked off the vodka craze in the United States back in the '50s. A strange creature with a mild bite, the Moscow Mule owes more to stateside hucksterism than to its Commie namesake.

Legend has it that a year after World War II, Americans were intrigued by one of their more notorious allies. Some went as far as to suggest that the Moscow Mule, made with the white whiskey most associated with Russia, was a heady olive branch. Although we'd like to encourage such claims of goodwill, we must not misrepresent the true tale of this ersatz classic of a mixed drink. Made with 2 ounces vodka and an ounce of lime juice topped with 3-4 ounces ginger beer, the Moscow Mule was a mere marketing ploy of some Capitalist American. Anyone that has tried one would agree that the Moscow Mule is a cool vodka libation with a slow ginger burn that warms the blood on a cold winter night. And who doesn't love a little lime shot in the dead of the freezing season.
Email ThisBlogThis!Share to TwitterShare to FacebookShare to Pinterest
Posted by Karen @ BonjourBruxelles at 3:16 PM
Labels: cocktails, entertaining