I was recently talking with a friend about what super powers one might want to have in day-to-day life and what super powers some people already seem to possess as they conduct themselves throughout the day. Here's just a random list of super powers that I've witnessed and what I wish existed, either by myself or others. 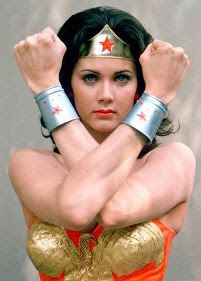 Ability to Withstand Freezing Water Temperatures Super Power
I think Colby, my son, has this super power whereby he has no feeling of ice-cold water. His lips don't turn blue, he never shivers, yet he's able to frolic and surf in 50° for hours on end.

Zombie Super Power
Both of my kids will become mute, deaf, zombie-like creatures after a good 30 minutes of television. They could be inches away from some freaky flaming-red haired Bozo the Clown with tambourines and cymbals strapped to his legs and they'd never notice a thing.

Sonar-like Hearing Coupled with Amazing Smell Super Power
We can be sitting in the middle of a loud soccer game and my daughter, Maia, will stop dead in her tracks, tilt her head every so slightly and hear the ice cream truck from a good mile away. She can also smell chocolate from at least 50 feet away.

Creative Tenacious Super Power
Begging is not allowed in our house. The minute someone begs all bets are off. And that's understood. Clearly. What's amazing is this ability that one or both kids have to finding begging alternatives. Either through notes, signs, clipped pictures, sandwich boards, etc. they will let it be known that there is something of great interest that they'd like to own or have.

Multi-tasking Super Power
This is mine, all mine. And it's one I'm most proud. I can feed, bathe, clean, tidy, fix, email, spin plates, juggle, hula-hoop, jig, and hurky all at the same time. It's really quite awe inspiring. Unfortunately, I'm the only one that knows that this skill is really a super power.

Sun screened Skin Super Power
I'd give this to my husband Scott and my son right away. Never would they singe, never would their skin redden or blister in the sun. Instead, they would just casually freckle and maintain their wonderful Irish pallor.

Playing Tag-Chase-Any-game-a-kid-wanted-without-getting-bored Super Power
Now how great would that be? You play and every one's happy. And tired. And then they sleep.

Patience Super Power
Can you imagine how great that would be? I think many Buddhists have this already. Waiting in line, waiting for the subway, waiting for a mom to finish her conversation with a friend.....this could possibly be an all time best super power.

Lovey Howell on Sugar Beets Super Power
While I may have the super power and ability to multi-task I don' t have the speed that Lovey did when she downed some of those nuclear-grown sugar beets on Gilligan's Island. Man, she was wicked fast. What a time saver, no?

Email ThisBlogThis!Share to TwitterShare to FacebookShare to Pinterest
Posted by Karen @ BonjourBruxelles at 10:14 AM
Labels: family, Hilarious Commentary