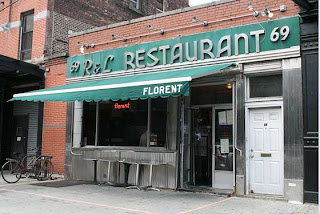 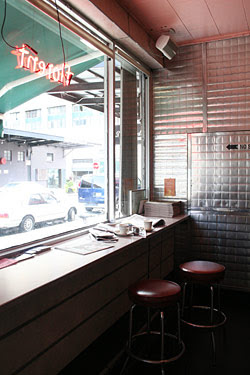 So much can be said about this institution.  It's nearly impossible to find anything like it
these days....a french diner?   24 hour bistro?  And sadly, florent is no longer open. 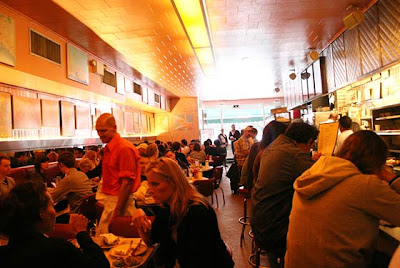 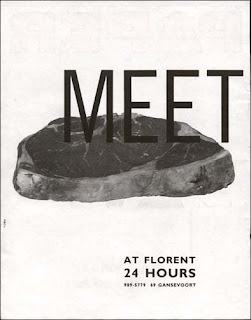 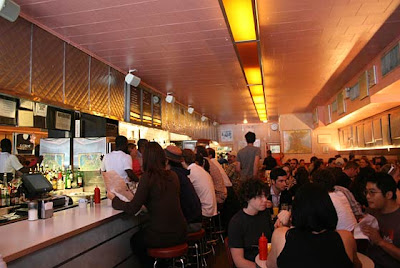 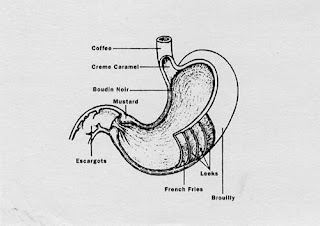 From cookedbooks:
Restaurant Florent opened its doors at 69 Gansevoort Street in 1985 (Bryan Miller, in his 1986 New York Times review, called it "an Edward Hopper painting come to life"), and the restaurant remained a constant landmark in the Meatpacking District for nearly a quarter century, until it closed in 2008. While much has been written about Florent, the restaurant, and Florent Morellet, the restaurateur, the menu itself is one of the most potent reminders of the beloved eatery.
The menu was designed by the great graphic design firm M&Co., which was headed by Tibor Kalman (July 6, 1949 - May 2, 1999). Kalman was also the creative force behind the China Grill logo, the Talking Heads albums Remain in Light and Naked, Colors Magazine and much more. Kalman left the inside of the menu simple -- a playful retro design (in keeping with the diner atmosphere inside the restaurant) -- while displaying colorful maps of world cities in front, a different city for each menu. The result is a wonderfully clean design with a sense of humor and a clearly recognized brand.
When Florent closed, the [New York Public] Library was generously given a few menus for the collection -- all undated -- plus a 1985 menu from the restaurant's first year in business. I'm thrilled to have them included in the Library's archive. 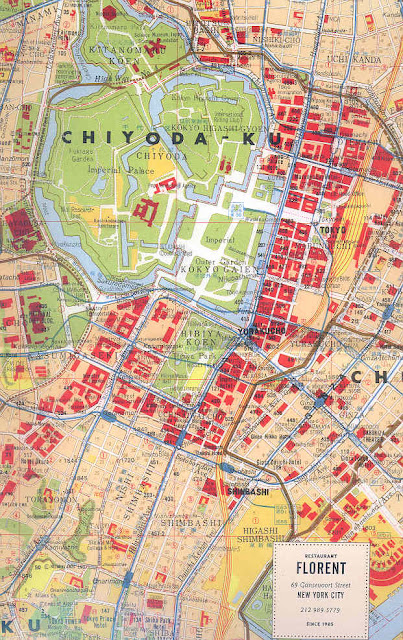 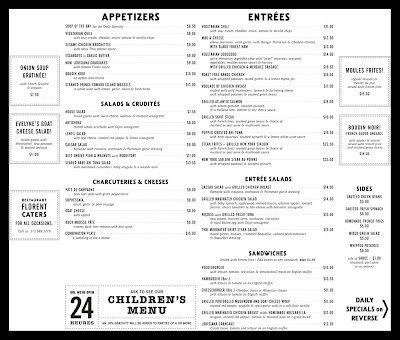 Florent was so much more than a stylized diner.  It was an integral point in the development of the meatpacking district, pre-Jeffrey and pre-Pastis.

.....Florent Morellet is the patron saint of the meatpacking district. His diligence in fighting for the integrity of this neighborhood, people with HIV/aids, the High Line, the right to die, and gay rights, among other causes, is humbling. And his annual Bastille Day party is more fun than anything they throw in Paris. Support his restaurant, because most likely he supports you and people you love.
It should also be noted that a documentary recently premiered at the New York City Food Film Festival.  (A word of warning: this trailer is NSFW)

Email ThisBlogThis!Share to TwitterShare to FacebookShare to Pinterest
Posted by Karen @ BonjourBruxelles at 10:10 AM
Labels: food, New York, Paris, travel