What's the Very Best of Savory and Sweet?

I'm not a big ice cream nut. In fact, we always seem to have pints of chocolate crunchy frozen goo or minty nut creamy dream in the freezer. Sometimes even with freezer burn. At the end of a meal, I'd rather have a bite of Gorgonzola than dip a spoon into cold, creamy sweetness.

However, this past Saturday I had the immense pleasure of attending an underground supper. It was a covert dinner for the foodie-appreciative. The night was completely organized and comfortable. The menu, based primarily on locally raised and grown foods, was created by the hostess, Maura O'Toole. And suffice it to say, the food was amazing and the company outstanding. And to cap off this meal, we were served a rosemary honey ice cream that was just incredible.

For me it was the perfect combination of savory and sweet. Creamy rich rosemary woodiness with a touch of honey. 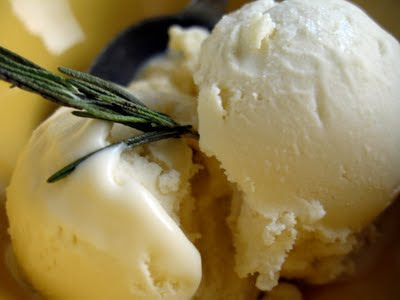 
In heavy saucepan combine the cream, half and half, and the rosemary. Bring mixture just to a boil and remove the pan from heat. Let mixture stand for 15 minutes. In a bowl, whisk together egg yolks, honey, and sugar. Add the cream mixture in a stream, whisking, and pour the mixture back into pan. Cook the custard over moderately low heat, stirring until it registers 170• on a candy thermometer. Strain through a fine sieve set over another bowl and let cool completely. Freeze the custard in an ice cream machine according to manufacturer's direction. Makes about 1 and a half quarts.

Email ThisBlogThis!Share to TwitterShare to FacebookShare to Pinterest
Posted by Karen @ BonjourBruxelles at 10:27 AM
Labels: cooking, food