Build me up, Buttercup

Here's the dealio: squash isn't only a verb it's a mighty tasty root veg that gets loads of play during these chilly, autumnal months. You've got your acorn, butternut, pumpkin, even a hubbard now and then.

But one that gets overlooked is the Buttercup variety. This lusciously soft orb has a wonderfully orange flesh that's like no other....very nearly the same color of the sky in October at dusk. And the skin, when cooked, is not only edible, it's quite flavorful.

We had a dreary day yesterday - one that was just begging for heat, both the warm kind and the spicy kind. So, I altered an old squash soup recipe I had. And it was a hit. The spice should be adjusted for the younger folk. 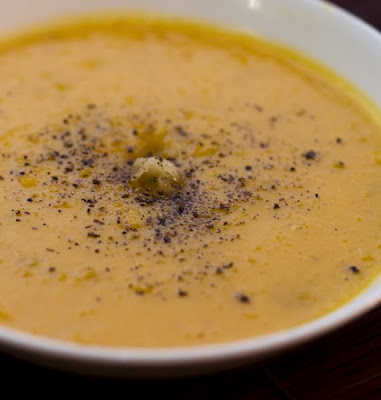 DIRECTIONS
1. Preheat the oven to 375 degrees F (190 degrees C). Pour a thin layer of water in a baking dish, or a cookie sheet with sides. Place the squash halves cut side down on the dish. Bake for about 40 minutes, or until a fork can easily pierce the flesh. Cool slightly, then remove the peel. Set aside.

2. Melt the butter in a large pot over medium heat. Add the onion, leek and garlic, and saute for a few minutes, until tender. Pour the chicken broth into the pot. Add the potatoes, and bring to a boil. Cook for about 20 minutes, or until soft. Add the squash, and mash with the potatoes until chunks are small. Add the cayenne. Salt and pepper to taste. Use an immersible hand blender to puree the soup, or transfer to a blender or food processor in batches, and puree until smooth. Return to the pot.

3. Stir in the sherry and half-and-half cream. Heat through, but do not boil. Ladle into bowls, inhale.
Email ThisBlogThis!Share to TwitterShare to FacebookShare to Pinterest
Posted by Karen @ BonjourBruxelles at 9:33 AM
Labels: food

I'm inspired...I might go a little heavier on the sherry, however :-)

Warm, this just looks really warm, and smelly, good smelly. Sunday soup day it is, as last Sunday's soup was a tomato throw together that no one would eat. Rough crowd.

finally made this last night and... very nice! i paired it with asiago and jalapeno scones, which was a perfect combo. thanks for sharing this!