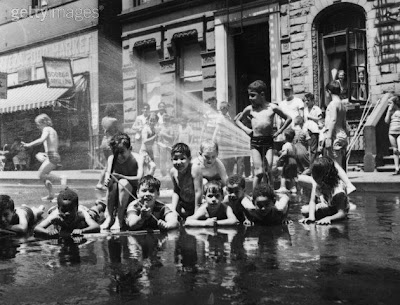 You know that feeling that's only in the summer, that feeling of hotness, sweatiness, puffiness? Unless you're standing in front of an open refrigerator or AC vent, you're not really going to cool down. You are hot. You are drenched. Red face. Sweaty droplets. Just h.o.t.

And if you're 12 and you just finished mowing the lawn, jumping into a big pool of Orange Fanta really appeals to you or at least anything that was cold, sugary, and refreshing.

So. Now a days, when I'm hot there's really only one sure way to cool down. Something cold. Something sugary. And something refreshing. 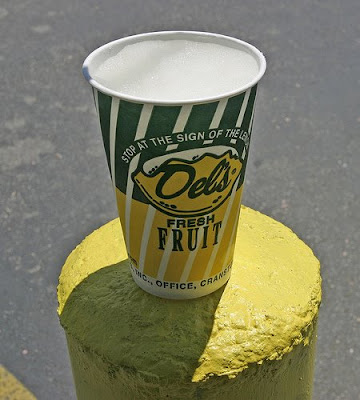 Del's Frozen Lemonade. Make no mistake, this is not some fancy lemon granita or lemon sorbet or lemon ice. This is straight up lemon-sugar-snow. And not corn syrup-y, thankfully. And it's only found in Rhode Island. Best in the hot summer months. And usually from some outdated circa '70s truck (aka Dels Mobile Unit). 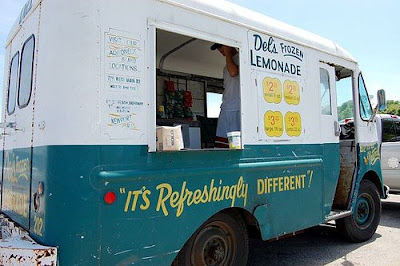 A brief history, courtesy of Dels:

Great grandfather DeLucia made the earliest Del's Frozen Lemonade in 1840, in Naples, Italy. During the winter he carried snow into nearby caves and insulated it with straw. When summer arrived and the local lemons were ripe and flavorful, he mixed their juice with just the right amount of sugar and snow. Thus making a refreshing drink, which he sold at the local market. Fruit ices are popular in Europe, yet none is more loved than the product made from fresh lemon juice. Lemon ices produce the most delicious and thirst-quenching treat.   Grandfather Franco DeLucia brought his father's frozen lemonade recipe to America at the turn of the century. Angelo DeLucia, his son, began work on a machine to produce the frozen lemonade, and on a method of making it a consistently excellent product.

In 1948, Del's Frozen Lemonade acquired it's name and became the sole product sold at a little stand in Cranston, Rhode Island. Soon, Angelo had designed the first mobile units in order to serve anywhere in the state.   When Angelo's son, Bruce, entered the family business there were 5 franchises in Rhode Island. 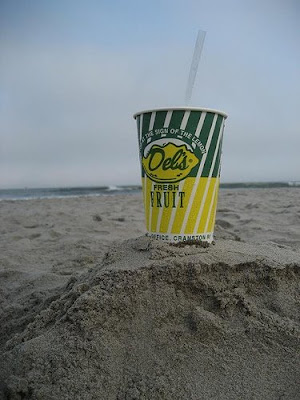 For maybe 2 clams you can cool down with a delicious icy cup of lemony snow, complete with sugary lemon bits, occasional pulp, and brain freeze, if gulped too quickly. 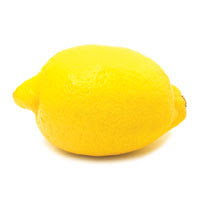 Not everyone knows how to consume a frozen Del's—you could use a spoon or a straw—but experienced Del's consumers have their own technique. You simply squeeze the cup from the bottom in the palm of your hand as you drink. It also helps if you shake the cup from side to side between sips to release the fluid from the ice. If you were to use a straw you'd just suck out all the liquid and be left with a flavorless iceball. I'm just sayin'.

I've only been to RI once, more than ten years ago, but I still have fond memories of enjoying a Del's on the beach. That, and Newport Creamery (At the Sign of the Golden Cow).

When I was in college, a Del's truck would park on the street that ran through campus. Everyone would get a Del's on the way home from class.

Sometimes, a Mr. Lemon truck would come. Somehow, it wasn't the same.

Thanks for the memories! I haven't had a Del's in 10 years. Yum!