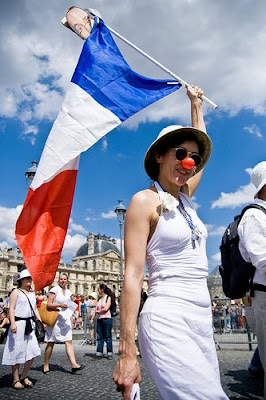 Bastille Day, the French national holiday, commemorates the storming of the Bastille, which took place on 14 July 1789 and marked the beginning of the French Revolution. The Bastille stood as a prison and at that time a symbol of Louis 16th's absolute and arbitrary power.

I'm not so much in to prisons. No. But was does come to mind in the flurry of romantic French cultural hullabaloo when someone mentions Bastille Day is all things delicious, sophisticated, and slow.

My eyes begin to flutter. I stand still, frozen almost. And I go straight to this sweet little hotel on the Left Bank. 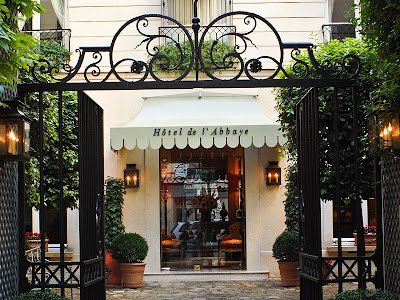 Located on rue Cassette, right in the middle of the Sixth Arr., this hotel has all that anyone needs to feel as though you are far, far from home.

With its garden courtyard, large fireplace in the lobby, and manor-like appointments, this converted 17th-century abbey feels like a country estate in the middle of the Left Bank. Rooms range from monastically small to apartment-like duplexes (some with partial views over Saint Sulpice), but romance is a constant throughout the establishment; floral-printed (but not chintzy) chairs, bedcovers, and drapes echo the lovingly tended blossoms in the Luxembourg Gardens just beyond. As in most Parisian hotels, the rooms are small, but the service is attentive, the ambience homey, and the location ideal—close enough to the action of Saint Germain, yet at a pleasant remove from all the traffic. (Travel+Leisure)

Not entirely a prison but certainly a place I'd like to be held captive for a while.
Email ThisBlogThis!Share to TwitterShare to FacebookShare to Pinterest
Posted by Karen @ BonjourBruxelles at 12:01 AM
Labels: travel

Your blog keeps getting better and better! Your older articles are not as good as newer ones you have a lot more creativity and originality now keep it up!