Just down the street from where we live in Brookline Village is a row of restaurants. Serving mostly the commuter crowd, you can find sushi, Szechuan Chinese, or Korean as easy as a dry cleaners or coffee house.

At the end of this row sits a small corner restaurant, Tashi Delek. This warm and inviting establishment opened a little over two years ago and serves amazing food from Tibet. 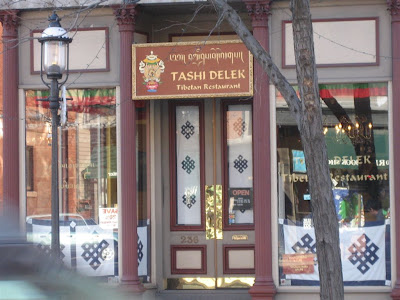 Owned and operated by Lobsang Thargay and his wife Phurbu, they have apparently succeeded in perserving their culture with this peaceful eatery. During the winter we've gotten into the habit of ordering take-out from Tashi Delek. The food is comforting, warm, with just enough heat to open up your senses. And what I really get a kick out of: when you call to order, Phurbu answers with this calm, dreamy voice that takes you immediately to serenity. As if the Tibetan spirit can travel through the phone. 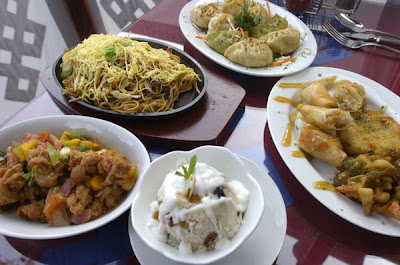 In Tibet, where the mountaintop geography has earned the country the nickname "roof of the world," food is fuel. To stay warm in the high altitude, Tibetans have historically eaten energy-rich mutton, yak meat, dried beef, barley flour, high-fat yak milk, and tea blended with salted butter. Root vegetables like turnips and potatoes were staples, since few veggies or fruits grew on the arid plateaus.
R

So are yak and buttered tea on the menu at Tashi Delek, a four-month-old Tibetan restaurant in Brookline Village where Café Samovar used to be? Yak, no. Buttered tea, yes - as well as soups, simple salads, noodle dishes, the famous Tibetan dumplings called momos, and entrees of beef, chicken, shrimp, or greens.

Tibetan cooking is similar to Chinese, Indian, Thai, and Nepali cuisines. But it's not as oily as Chinese food can be, nor as heavy with thick curries, fiery chiles, and clarified butter as many Indian dishes are. It doesn't revolve around the Nepalese mainstays of lentils and rice, and it's not as tropical and seafood-oriented as some Thai menus tend to be. That makes Tibetan a good choice for lighter, mildly spiced Asian foods.

At Tashi Delek (the name is a Tibetan greeting meaning hello and good luck), the food is prepared by chef-owner Lobsang Thargay, who opened the restaurant in September with his wife, Phurbu. The couple came to Boston in the 1990s through a resettlement program for Tibetans living in India and Nepal. They were both born in India, but their parents fled Tibet after it was occupied by China in the 1950s.

Their restaurant is pretty and peaceful. A photo of the Dalai Lama smiles over the dining room, and a panoramic picture of Lhasa, Tibet's ancient capital, graces one wall. A back counter is decorated with the eight auspicious symbols of Buddhism, including a lotus blossom and golden fish. "We are doing our best to preserve our culture," said Phurbu, "and tell that world that Tibet is still a country and we are keeping it alive."

Lobsang, who studied at the Cambridge School of Culinary Arts, is a talent in the kitchen. His warming soups ($4-$5) are perfect for this time of year: shen dal, a thin curried lentil; jhasha thang, a sweet corn soup flecked with whole kernels; tsel thang, miso-like broth with tiny tofu cubes, torn spinach, and mushroom slivers; and, best of all, drothuk, oatmeal porridge speckled with ground beef.

I also love his momos (appetizer $6.50, entrée $14-$17), fat dumplings stuffed with pureed broccoli, cauliflower, and shiitakes; spinach and ricotta sweetened with sugar; tofu; or ground beef. The pasta wrappers are overly thick, but the fillings are richly flavorful and pair nicely with tomato chutney spiked with mint and jalapeno.

Potato patties called sho-go numtak ($4.50) have a thin deep-fried exterior but are perfectly smooth inside. In many of the poultry and shrimp dishes, the meat is battered and lightly fried, which makes the chicken in the jha-sha mango salsa ($15) off-puttingly bready, despite its pleasantly fruity sauce. So we asked for sauteed shrimp in chu bu kha tsa ($16), a mix of yellow and green squash with zippy red curry, and the end result was delicious.

As for that buttered tea, known as bhod jha ($2), it's an acquired taste I've yet to acquire. "It tastes like drinking melted butter," a friend said. I prefer a sweet ending such as deysee ($3.50), sugared basmati rice with raisins, almonds, and a dollop of yogurt for lively tang. 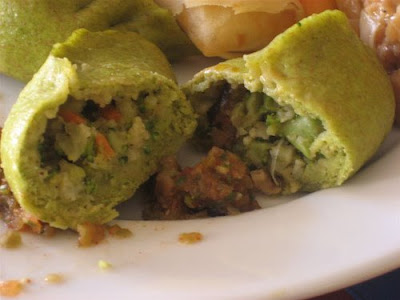 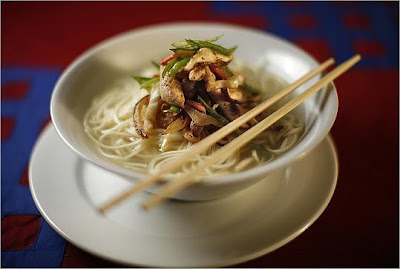 Shey Thuk with Chicken and Shiitake Mushrooms and Cabbage

I have never been to Tibet-but hope to one day. I can only think that the flavors of Tashi Delek portend an unforgettable experience.
Email ThisBlogThis!Share to TwitterShare to FacebookShare to Pinterest
Posted by Karen @ BonjourBruxelles at 4:16 PM
Labels: Brookline, food