Lately, with the chill in the air, Scott and I have found ourselves entertaining so much more on the weekends. Rather than spending the weekends in Rhode Island, as we do during the summer months with family, we're now hosting good friends or spending an evening at friends....just dining and chilling and drinking while the kids scamper about or argue over some board game that they're playing.

So, cut to when Scott and I were in Brussels just recently. We went out for dinner every night. We went out for drinks. Lots of bon vivantism went down (and rightfully so). And I know there's a total rose-colored-glasses thing when you travel but I swear, even the simplest little appetizer seemed to be dressed or adorned with some hyper-cool-euro thing that made me think that all of my tools for entertainment were so blah.

One night in Brussles, when we had a cocktail in the lounge of the hotel where we stayed, I was so moved by the well-designed display of simple hors d'eouvres that I quickly jotted exactly what we had down and what it looked like on a napkin. Just so I could reproduce it again.

And now back to the present. Here's what I'm looking for: beautiful picks. Just that. Not a toothpick, mind you. More like a short skewer. And it can't be metal.....I'm not crazy about the metal spike look, too much like a GI Joe's weapon. No, I prefer something like a bamboo reed....or stick or something. Even resin would do it for me.

Because with all the interest in retro-cocktails, I think it's only fair to bring back hors d'eouvres that are speared with a beautiful pick. Yes? 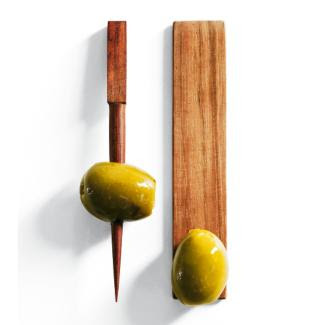 i'm sort of jealous. I want to come to your house for fun drinks and board games.

have you tried ebay? ew. but then you don't really want used do you. I think I saw something like this in Japan town in SF. next time I go, I'll keep my eyes open for you

(just had a clock work orange vision go through my head)

It's pretty amazing that the simple connection of toothpicks and a unintended eyeball pun could make me laugh as hard as it did.

i found something at cost plus (or world market) that is sort of this idea but like a palm sunday version.