I had a couple out-loud guffaws with this....so I share (but read as tho you're a guy): 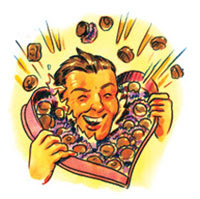 This month: The Valentine’s Day Dare.

One-Point Dares
1. In your workplace, distribute Necco Sweethearts candies custom-inscribed mitt ’08.
2. Tell your girlfriend that you’ve planned a romantic night in—and upon her arrival, start up a DVD marathon of Judy at Carnegie Hall, Liza with a “Z,” and Yentl.
3. Book a coveted table for two at the most romantic restaurant in town, show up with a buddy, and engage him in a loud argument over who is the better guitarist, Joe Satriani or Steve Vai.

Three-Point Dares
1. Stand outside the home of your beloved with a boom box and re-enact John Cusack’s arms-aloft “In Your Eyes” scene from Say Anything—only with the boom box playing “Movin’ On Up” from The Jeffersons.
2. Every time you see a couple kissing, lean into them and say lasciviously, “Hey, lemme get some of that.”
3. Using a vacuum cleaner with the floor-brush attachment removed, give yourself a conspicuous hickey. Then strut around the office saying “Who’s the man!” while shooting “double pistols” at colleagues with your index fingers. 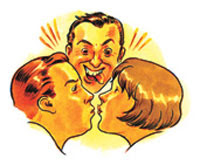 1. Ask your clergyman if he has plans for the evening, making air quotes around the word “plans” and thrusting your pelvis.
2. Stand outside the most romantic restaurant in town with your young children, holding up placards that say sinners and screaming, “Re-pent, for-ni-cay-tors!” at couples as they enter and exit the restaurant.
3. Feigning Canadianness, insist to your co-workers that February 13 is Canadian Valentine’s Day. On that day, present a knobby parsnip to an attractive colleague and say, “This is how we show our love up north.”
Email ThisBlogThis!Share to TwitterShare to FacebookShare to Pinterest
Posted by Karen @ BonjourBruxelles at 6:26 PM
Labels: Hilarious Commentary