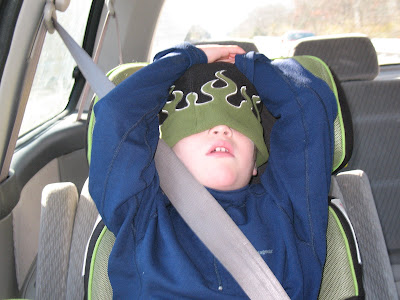 Chatty McGee (aka Colby) starts his day with a litany of questions. From the minute he wakes up, through breakfast, getting dressed and while he's walking out the door he's got loads of questions. Today the inquisition was all about the Army, war and generals.

"When there's no war does he have lots of free time?"

"No, not really. He still has to prepare the troops."

"Yup. It's his job to protect them"

I, the Multi-tasker Mother Supreme, answer or respond the best I can as I dress, feed, pack, organize.... However, by the time Colby's got to be out the door with Scott to walk to school, I'm happy to pass the baton of Answer-Person to Scott.


"Does the Army change generals?"

"Colb, you're going to have ask Daddy that question as you're nearly late for school"

"But Daddy doesn't know everything."
Email ThisBlogThis!Share to TwitterShare to FacebookShare to Pinterest
Posted by Karen @ BonjourBruxelles at 9:12 AM
Labels: family, Hilarious Commentary

Nice! I bet you were beaming, I know I would have been.

Ooooh, I love that! The mama knows ALL. How does it all change when the kid turns 13?