The drive. The drive from Naples to Massa Lubrense. Big loads of fun and if Scott didn't speak Italian I'm not sure we'd actually ever arrive. First, there's the whole lack of signage and lack of highway identification. Makes Boston look very organized and easy to navigate. Then there's the enormo tour buses that are enormo. Huge. And then, on top of all that there are these helmet-less Vespas whizzing about like gnats in your face, blocking your view. At first we thought it was funny. Kids thought it was hilarious, the cliffs, the buses, the scooters, the S- curves and btw, kids were total troopers. None of us had had enough sleep the night before. It was hot as Hades-AC barely cranking anything out-and it was lunch time. But then we stopped laughing. There was a strange hush in our little car. We got to Sorrento. And got lost. Then we got out of Sorrento. And got lost. And then we got ourselves down a road that wasn't really a road, even though there were cars parked along the side. It was a road that became a walk-way that became a path. But with our American optimism we just thought the road would magically get bigger. But it didn't. And so after realizing we are in the wrong place, on an incline that was probably at a 45 degree angle, Scott got us in reverse to back out, burned a whole lot of oil and bonked right into a Mercedes.

Owner came out of this villa. A guy that was probably in his mid-60s. He was angry and then he saw the kids and he was nice. He got us out of our predicament, even reversed our 2-cylinder Opal out of the narrow passage way and directed us straight to our hotel. And he gave the kids some biscotti and water.

And then we went to the pool and ate. And drank. A lot. 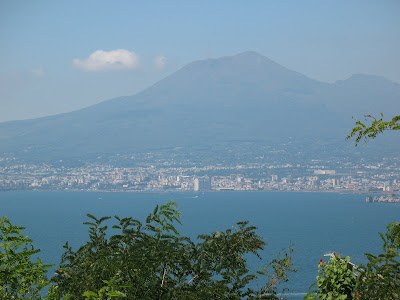 but fun to pretend that at any minute she could blow!

Jazz hands and high kicks from Colby. On the Lido deck of our hotel. Pretty cool seating area closest to the water (which is like a 100 yard walk down stairs). 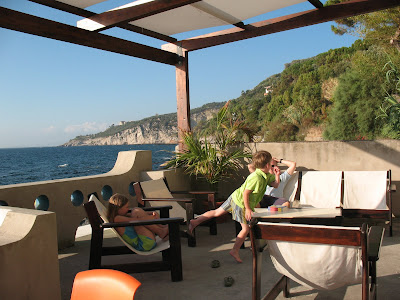 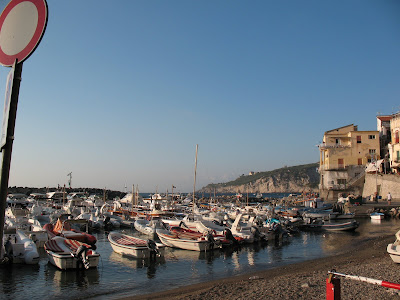 Massa Lubrense and Marina del Lobra. The port. Very small fishing village that seems to be populated by about 200 but apparently there are more folks living about. Super quaint, quiet. So glad we cax'd the Sorrento deal....because my take on Sorrento (having gotten lost, saw more than I would have liked) is that Sorrento, big tourist destination, is very pretty. But it's touristy. Sorta like an ancient Provincetown, gorgeous in places and honky-tonk in places. Noisy. Crowded. Night life.

And then this little town, Massa Lubrense, still seaside, just 5 miles from Sorrento, still on the way to Capri, Amalfi and Poisitano. Is not unlike Block Island. Gorgeous. Seaside. Small. Quiet. Totally our cup of tea.

Today we're off to the other sites on the coast. Scott's going to get behind the wheel again...better prepared for the adventure that awaits. I've got a sweatband he can wear ala Olivia Newton-John.

And I'll have more later.

Email ThisBlogThis!Share to TwitterShare to FacebookShare to Pinterest
Posted by Karen @ BonjourBruxelles at 12:57 AM
Labels: family, Italy, travel