Have you ever had Vegemite? 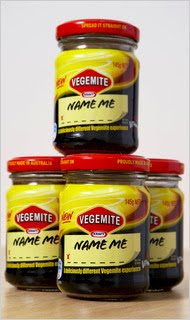 Quintessentially Australian. And not unlike American Peanut Butter, basically a condiment that is viewed as utterly disgusting by the rest of the world.

Well, the folks at Kraft Foods were dying to change the name of Vegemite. Not because of the taste, but because it seems it was overdue for an update.

This salty, gooey, yeasty, paste is, well, gross. Just gross. But it's beloved by all Australians.

"Australians are passionate about Vegemite. Travel almost anywhere and you are likely to find an Aussie with a tube of the brewer’s yeast extract stashed in his bag. Babies are weaned on it. Schoolchildren eat it on sandwiches. Adults revere it as a hangover remedy, a vital source of Vitamin B and a staple breakfast food — spread lightly on hot buttered toast." -from the NYTimes. 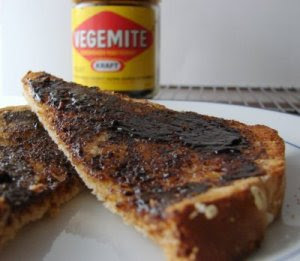 But living in a country with beloved and iconic foods such as sliced white bread, peanut butter, and maybe something I found called 'frito pie', who are we to judge a national sticky paste favorite?

So, no more Vegemite Sandwich, from the Men Down Under. 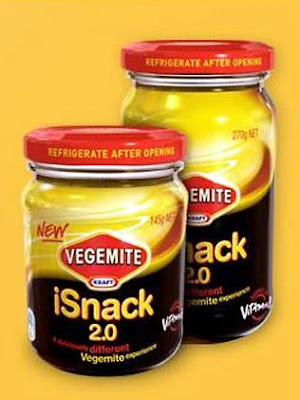 For now, at least.

**CORRECTION AND UPDATE TO THIS POST**
From a reader (and more thorough "investigative research") I understand iSnack 2.0 was scrapped. 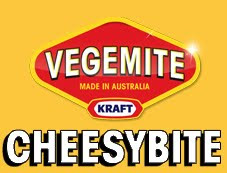 It's all really so very fascinating.....
Email ThisBlogThis!Share to TwitterShare to FacebookShare to Pinterest
Posted by Karen @ BonjourBruxelles at 7:29 AM
Labels: food, travel

iSnack? lame! what about iBarf?

it's all lipstick on a pig, and an insult to pigs in the bargain.

btw, what have you got against peanut butter? the rest of the world may not have the access to goober peas that we do, but they have their own nut butters (eurpoeans are certainly fond of their hazelnuts).

and your stand on nutella?

Peanut butter I'm not so against, but I know the rest of world seems to think it's really yucky. Or maybe it's the whole peanut butter and jelly combo that is so yucky....as for nutella, it's a staple in our home. Total staple (and would probably also be used as a staple if it more solid).

there was such an uproar over the name that they have scrapped it and it is going to be cheesemite. It is actually a second product, vegemite blended with cheese... I love vegemite but even I am not keen on that combination.

Thanks Her. I'll add an update to this post. The article in the NYTimes mentioned something about the cheese-vegemite combo. Now I guess it's the new-new product and name? Great to have an update.

Why has EVERYONE taken Apple's idea of using a lowercase "i" at the start of a word to try to appear hip and cool? It just ends up looking lame. Or should I say, "iLame"?

And all this talk about peanut butter is making me think that a PB and raspberry J sandwich on good whole grain bread is in my immediate future.