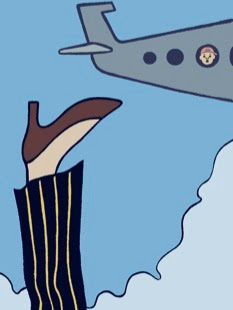 Seeing as how fate has brought us together here, in the crowded coach section of this expensive airplane, I thought I should introduce myself.

My name is Amy, and I’m an adult. I suspect that you’re too young to understand what “adult” means, so let me explain. It means that I’m taller than you, and smarter, and that I get to do lots of awesome things, like smoke cigarettes and ovulate. It also means that I like to take naps on airplanes and read my newspaper in silence. These things seem to be very different from the things that you like to do.

I’ve gleaned from its near-constant utterance by the woman sitting next to you—your mother, I suppose, or perhaps a social worker or a federal prisoner who’s being paid to spend time with you—that your name is Timmy. It’s probably Timothy, actually, but people call you Timmy because it’s cuter. Which is appropriate, Timmy, because you’re very cute, you really are. You’re really very f*cking cute.

I’m going to drink this cup of coffee—would you like some? I didn’t think so. You’re more of a juice-box man, from what I gather. The way I gather this is by looking at the stain on my ninety-eight-dollar pants, the one you made when you put your juice box there. If I touched your pants, Timmy, I would probably be sent to jail. There are lots of differences between you and me, but that’s one of the big ones: the quality and the seriousness of what happens when we touch other people’s pants.

You’re not much of a sleeper, are you, Timmy? We’ve just met, but it seems to me like maybe you don’t really enjoy sleeping all that much. In fact, it seems to me that one of your greatest joys in life is wakefulness—and not simply passive wakefulness but the kind of vigorous wakefulness that makes a person like me start to question the very possibility of silence as a condition that can exist in the universe. I can see that I’ve confused you, Timmy, and I apologize; I was only trying to point out that you really seem to enjoy being awake. Let me make it up to you by giving you this modest dose of Ambien. It’s a kind of candy for your soul. Your soul is a kind of mouth that’s inside your brain.

Here comes the nice stewardess lady with a bag for collecting people’s garbage. Would you like me to give her some of the garbage that’s strewn all over your seat—and, if we’re being perfectly honest here, Timmy, all over my seat as well? And, while we’re at it, maybe I could give her this talking doll—the one that sings songs, very loud songs, songs of terrifying and ungodly volume, from that animated movie about adventurous insects. It’s not that I don’t love the doll; it’s just that I’m pretty sure it’s illegal for children to carry such things on airplanes. Have you heard of terrorism, Timothy? That’s why it’s illegal for you to have this doll.

Your whimpering and your dripping facial parts suggest that perhaps this conversation has run its course, so I’ll let you get back to your finger painting, your fidgeting, and your wanton, inexplicable shredding of the in-flight magazine. I’ll be here in my seat, fantasizing about hurtling my childless adult body out of the airplane and into the sky. Enjoy the rest of the flight, Timmy. I’ve really enjoyed sitting next to you. It’s fun to make new friends. ♦

ILLUSTRATION: MICHAEL KUPPERMAN
Email ThisBlogThis!Share to TwitterShare to FacebookShare to Pinterest
Posted by Karen @ BonjourBruxelles at 11:23 AM
Labels: Hilarious Commentary

So funny because it's so true!

Reminds me of my flight from NY to SF last month...

Two young children in the row behind mine, one kicking the seat of the woman next to me (thank goodness not mine). Her mother kept telling the woman to turn around and reprimand her child, something I thought was the mother's job. Then there was the child in the row ahead of us who cried pretty much the entire flight.

Thankfully I had my iPod to block out some of the ruckus. I can see why people invest in noise-reduction headphones!

I hope your next flight is better than Ozols' and mine!

I swear I have absolutely no tolerance for ill-behaved kids, unless they are clearly distressed or sick. I'm like the worst hall-way monitor on a plane. Of course that also might explain why I load up the kids' iPods with movies and whatnot for a trip......but thanks for the comment. I completely agree and wish you happy trails as well.

Thank you, thank you for this side-busting opportunity to laugh!