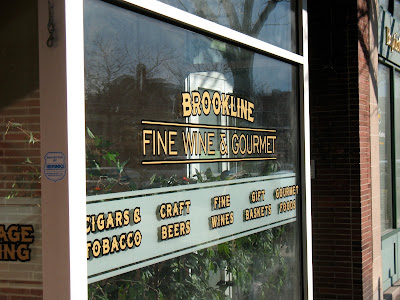 One might think that Brookline Village has just enough liquor stores - but when those stores seem to be either barely holding on by a thread with dusty, empty shelves or constantly changing ownership maybe one more wine shop isn't such a bad thing.

Ever the Nosy Parker, I happened into Brookline fine wine & gourmet earlier today. Formerly the home of Le Strada (the weird shoe store that always had a shoeless mannequin in the window) I was happily welcomed in. Amidst the construction and hammering, co-proprietors, Doug Gordon and Carrie Anne Martin greeted me with warm smiles.

Because of my own particular interest of owning and operating a specialty food store, I was eager to know specifically what sort of inventory Brookline fine wine & gourmet would carry. I learned that BFW&G will carry "gourmet chocolates", bread from Clear Flour Bakery, "pre-packaged smoked meats and salmon", and charcuterie (my word, not theirs) as well as freshly cut flowers, "infused oils", along with the obvious domestic and international craft beers, wine, and cigars. Weekly beer and wine tastings will be hosted every Thursday and Friday nights, with store hours open from 9am to 11pm, Monday-Saturday.

My guess is that it will be less South End Formaggio and more Marty's Liquors in Newton - perhaps filling a need in Brookline Village, maybe not. Either way, Doug and Carrie seemed enthusiastic about their prospects and their future here in the Village. According to Carrie, they will focus on "service, quality, and price". Like all businesses in the Village, we wish them well.

So, no scratch tickets. Instead, a place to grab a Cuban tobacco product (which seems a little 1996 to me), a locally fresh baguette, flowers, and a bottle of wine. "One stop shopping" as Carrie and Doug stated.

Oh! How exciting! Thanks for spotting this - I can't wait to check it out. I know a few people who will jump up & down about a nearby Clear Flour source, too!

I stopped by as well. I was told that they will be having a Grand Tasting (Grand opening event) on Feb 18. i cant wait! I think this is a well placed new gem in the village.

Stopped by today, not 100% working on all jets but the place looks wonderful. The mgr and staff was very friendly and the craft beer section is quite extensive. Finally, a wine shop in the Village.