Allow me to introduce my friend, Hendrick.....

And his ever classic Gin and Tonic. 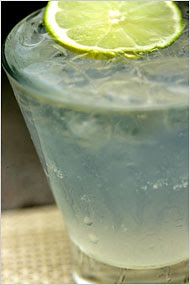 I've recently decided that the only suitable way to make a most delicious (if not somewhat magical) G & T is with Hendrick's Gin. "Hendrick’s is an iconoclastically produced small batch gin distilled in Ayrshire, Scotland."

Contained in a nice squatty bottle, this gin is a fairly recent addition to the typical spirits found on the shelves in your local liquor store. Although one might beg to differ - studying the clever label - you would have the impression that this Gin is centuries old. It's not. He's a modern dude, made by some wickedly clever Scots with a very rare distiller, one of four in the world.

And rather than a tall, slim bottle like Tanqueray or Bombay Sapphire, this short, rotund bottle is a little reminiscent of something you'd see in some old apothecary collection. And apparently, the Scottish creators of Hendrick's wanted to maintain a certain protectiveness and mystique to their handcrafted, small-batch gin. In doing so, they decided that an apothecary bottle would do nicely, which holds a liquid that pours like oil and tastes like a crisp cucumber. 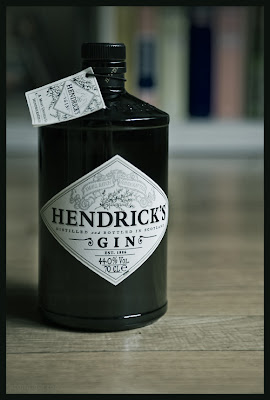 "Hendrick's has no shortage of eccentricities. It's the gin from Scotland. It's the gin in the cute green cardboard tube. It's the gin made with cucumbers. Yeah, pretty weird. But when you drink it, you know Hendrick's is more than its tag-line, "a most peculiar gin," suggests. It was obviously crafted with care by distillers who understood why cucumber (and rose petals, too) would blend so nicely with juniper, coriander and lemon zest. Like all true eccentrics, it makes a strong impression in this case, one well worth remembering ($30)......" (from Food&Wine)

....and the only proper way to toast to the waning hours of the hot, beachy days of summer.

Fill a chilled old-fashioned glass halfway with ice cubes, and pour in the gin. Gently rub the lime wedge around the rim of the glass, squeeze in a few drops of juice, and drop the lime into the glass. Top with tonic, and gently stir once or twice.
Email ThisBlogThis!Share to TwitterShare to FacebookShare to Pinterest
Posted by Karen @ BonjourBruxelles at 3:52 PM
Labels: entertaining, food

Hendricks is my new very favorite way to have a G&T, it's delicious and crispy and the perfect summer drink. And not available everywhere, which is snappy nice.

Those in the know drink their Hendricks with a slice of cucumber as the lime is a bit too acidic and muddies the taste of the liquor!

You know, I tried the slice of cuke...and it was good but I think my inner purest over-ruled. And I choose the lime. But thanks for the correction!