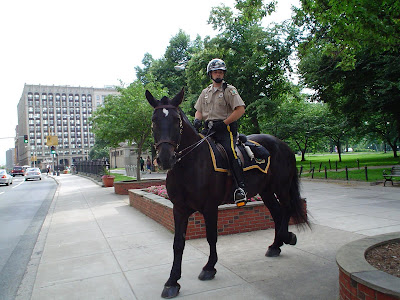 Does nothing say 'Law & Order' more than a clomping horse and jack-booted Johnny Law?

The unit, which comprises 12 horses and 10 officers, will be closed this summer, bringing to an end a service which dates back to the 1800s. About a dozen staff who help tend the horses will be laid off and the 10 mounted officers redeployed to foot duties. Boston Mayor Tom Menino described the decision as irreversible, but a petition has been started in a bid to save the unit, which costs $US600,000 a year to run.

New England Cable News Network, reporting on the closure, said homes were still sought for about seven of the horses.

Sergeant Chris Walsh said his preference would be to be find homes for the horses with other mounted patrol, given the horses' specialist training.

The oldest among the draughthorse crosses is Captain, at 26.

The horses have occupied leased stables at Jaimaica Plain since 1964.
Email ThisBlogThis!Share to TwitterShare to FacebookShare to Pinterest
Posted by Karen @ BonjourBruxelles at 12:58 PM
Labels: Boston area