Every year Pierce School has a "musical" that includes 2nd-6th graders.

(The 7th and 8th graders have their own musical -note no air quotes- that's a pretty elaborate, serious production. This year it was the Fiddler on the Roof).

The 2nd-6th grade musical isn't exactly elaborate as it is inclusive and all encompassing and.......inclusive.


It's really inclusive, because it includes an opportunity for every child that would like to participate to participate. So, inclusive is the best way to describe this. It's an Inclusical musical.

As a 4th grader she is a "full cast member" and is one of twenty or so 4th grade Who's. For the Seussical. Seussical the Musical (it rhymes. lots and lots of rhymes. throughout). Still not unlike a chorus but only this time there's dancing and hopping and bowing and swaying and twirling involved. This musical, by the way, is a collection of Seuss's favorite top 10 vignettes (Horton, Gertrude, Cat in Hat, etc.) with rhymes galore.

Play practice began in February for the April 10, 11 and 12 shows. Then she was given all the lyrics for every song as well as the entire script.

And maybe a month later she had it all committed to memory.

All of it. Every song. Every step. Every move. (Jazz hands, shuffle-ball-change, one-two-one-two, toe, heel, toe, heel aaaaaand stop!, etc.)

At first when there was this fresh buzz of Seuss in the air, she'd put on a 'show' in the afternoon in our living room and demonstrate to me and Colby her latest number.

Now, after nearly 3 months of this, she has to pay Colby to sit through her songs and dances and I find ways to get absorbed in some household chore or 'work that just has to get done...I'll be there in a minute....hold on.....coming.......".

And sadly, I'm well aware of how her childhood is all fleeting and I'll (maybe?) long for the days when she would just sing or hum or skip or dance and shake.....but now?

My tomboy has transformed into a little starlet and it totally bugs. And when she sings (not in a bad voice, usually on key) she does that gross, jittery thing so that her voice sounds exceedingly dramatic and lilting. It's just all too Hi5 for me. Just too ker-pow, all smiles and taDa! 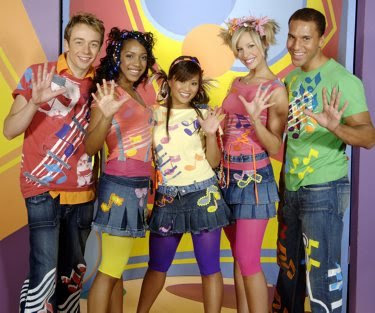 But she digs it and even though it's foreign to me, she's happy and her little singsong self seems to be floating a bit.

And I'll just have to succumb, plan ahead and see if I can't make a buck or two off this kid. Next stop: celebrity guru, Danny Bonaduce:

Email ThisBlogThis!Share to TwitterShare to FacebookShare to Pinterest
Posted by Karen @ BonjourBruxelles at 1:14 PM
Labels: family

I thought I heard her singing last weekend! I grew up singing and performing, jazz hands and all. I think I turned out fairly normal so don't worry there is hope! ha ha ha.
Maybe she will grow up to be another Norah Jones.