We've been lucky enough for the past 15 or so years to have family in New York City making trips frequent and affordable. Scott's sister and her husband live right in the heart of Soho and my bro and his family live just across the Brooklyn Bridge in Dumbo. We visit maybe 2 or 3 times a year, each time with a different agenda basically due to the age of our kids.

This recent visit was just perfect....and here are some particular highlights, recommendations and suggestions.

My brother, my kids, Colby, Maia (6 and 9 yrs. respectively), and myself walked from Dumbo to Soho, right across the Brooklyn Bridge. 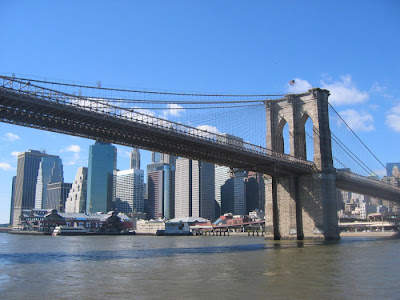 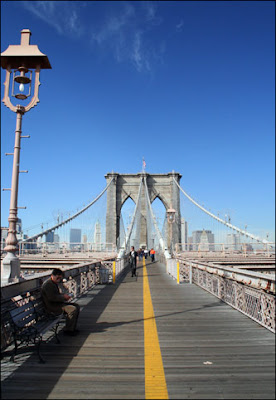 Statue of Liberty, including ferry, monument and stroll around Liberty Island was terrific. Especially haunting was the dramatic change in the NY skyline looking across the river....none of the landmarks or descriptive placards had been edited since Sept. 11, 2001 so they all had the twin towers depicted. 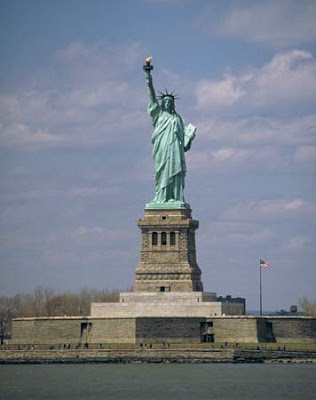 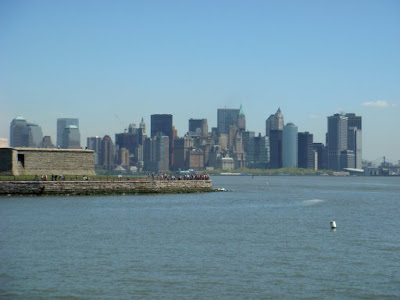 BEST PIZZA FOR EVERYONE
(that happens to be right in Soho)
Lombardi's - claiming to be the first pizzeria in NYC
32 Spring St.
Thin crust....straight from Naples, IT.
Awesome.

BEST VIEWING OF THE COGNOSCENTI
(of the painfully cool)
Apple Store (a former US Post Office)
103 Prince Street
I was busted for staring at least 4 different times.

From NY Magazine, Mark Isreal was just a toddler when his grandfather died. But years later, Isreal discovered a gift the elder left to the family: his recipes. One particular dessert, an eggless doughnut, intrigued the baker, and what started as a lark—wholesaling the gooey, organic sweets from a basement—has turned into a booming retail business of exemplary pastries. Just ask Martha Stewart, who featured the oversized delicacies on her show and had a batch delivered just before she was incarcerated. Now entrenched on Grand Street, Doughnut Plant indulges with delightful flavors such as Valrhona chocolate, ginger, pumpkin, and coconut. Isreal keeps repeat customers guessing by baking different flavors every month or so, but locals anticipate the seasonal specialties: roasted chestnut doughnuts in November, rose petal doughnuts around Valentine's Day, and a blueberry striped version during baseball season. In 2004, the baker introduced a square-shaped jelly doughnut, with organic raspberry or strawberry spread evenly throughout so there's no danger of a big glop landing on your shirt. The retail space is tiny, but you can get a mouth-watering view of the kitchen through purposely designed portholes and watch the team of bakers at work rolling, dipping, and glazing the treats. — Susan Avery

BEST PLAYGROUND WHEN YOUR KIDS JUST HAVE TO RUN
Brooklyn Bridge Park Playground
Right at the end of Main Street, under the Manhattan Bridge overpass....complete with the loud, rankeling noise of the overhead subway. 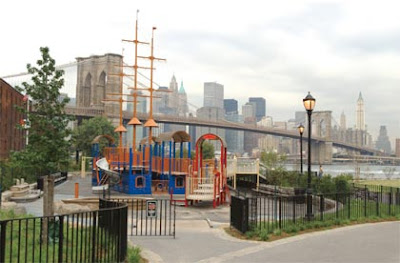 BEST CD TO LISTEN TO WHILE DRIVING TO AND FRO
(4.5 hrs. one-way Boston to NYC)
We don't do DVDs in the car. It's just good, ol'fashioned travel games and music. Kids get there music now and then. We get ours.
Radiohead - In Rainbows is just so smooth.
So beautiful.
Beautiful yearning angst.

Email ThisBlogThis!Share to TwitterShare to FacebookShare to Pinterest
Posted by Karen @ BonjourBruxelles at 9:28 AM
Labels: family, travel