Bawston - Home of the Red Sawx

Total confessional: We've lived here nearly 15 years and I've always had such a conflicted relationship with this city. What began as a love-hate affair has most recently moved into a more like-dislike fling.

I love Boston's location and proximity to the coast. I love that it's just a 6 hour flight to most of Western Europe. I totally dig the diversity here of both the people and topography. I like how you need anywhere from 2 to 5 hours to get to a remote New England island, really good ski country or New York City. I like the age. I like the history and what Boston's contributed to the US. I like the academia. The intelligentsia. I like the mentality, for the most part. And generally, I like the people. In Brookline, Newton and surrounds, especially.

But Boston's definitely not a world city-try as it may. Restaurants are so-so and close around 10pm. I'm really not crazy about the fuddy-duddiness that pervades this city. There can be a real curmudgeon-y lifestyle here, totally void of style. Even with the hordes of young college students (mostly transplants from the mid-west and outer reaches of the US) there's nothing really edge-y or cutting edge about Boston. What's cool in NYC or LA is cool in Boston, 6 to 9 months later. And words like traditional and conservative (not politically, more in manner) come to mind that accurately describe Boston. I guess, it's a lot like a sturdy, reliable cedar closet loaded with moth balls and clothes for storage. Useful but a little smelly.

But I would say the biggest downer is that Boston's got this crazy provincialism. With the 1970's busing crisis these very segregated suburbs exist. Italian-Americans migrated to the North Shore, Irish to the South Shore. And then this fandemonium that thrives. The Bruins and the Celtics and the Patriots and the Red Sox. Crazy, insane, over-the-top sports fanatics. That seem to be everywhere. Lemmings, all of them.

So, with my snobbery I've always sort of fought the local sports stuff. Even though I come from a very long line of Red Sox fans (generations of New Englanders and New Yorkers) I've always looked down my nose at those people.

But this year was different.

And I decided not to fight the natural urge to join the fun.

And there was a parade yesterday. A Red Sox parade. Since they won the World Series and all. And I decided to lose the attitude and join the fun.

This team of rag-tag, misfit, aged and yet rookie, hairy, diverse athletes totally represents both the awesome and the less than awesome of this city. 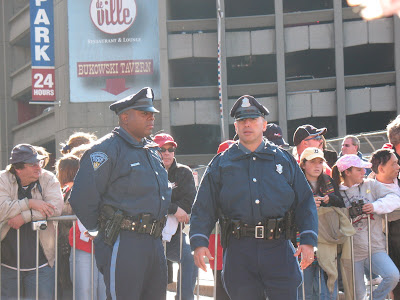 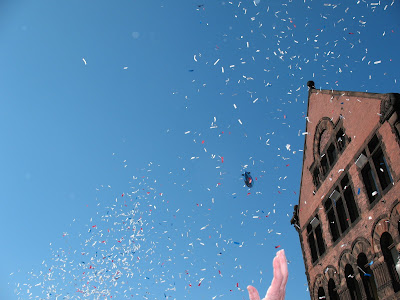 Ticker tape, a hand and an old building. 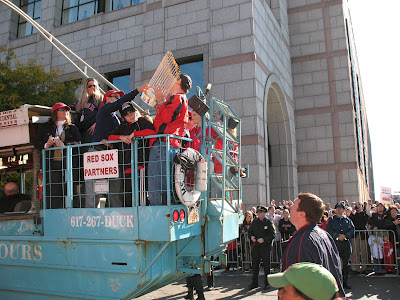 There's the trophy, if you can make it out. 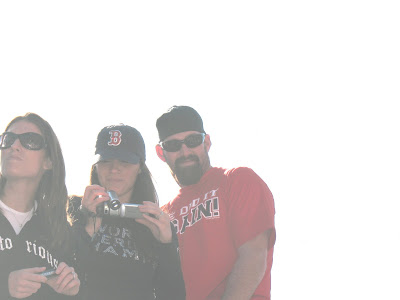 Karen You warm my heart. I have been a Red Sox fan for exactly 60 years. Still get goose bumps when the reply 2004. I am thrilled that my granddaughter and first grade class had a picture taken with the World Series trophy. And now my daughter saw the victoy parage, absolutely awesome.

I don't often watch as I fear I will jinx the team, a sixty year symptom which is very hard to get over.

I try not to live vicariously through my kids, but I may take and exception in this case.